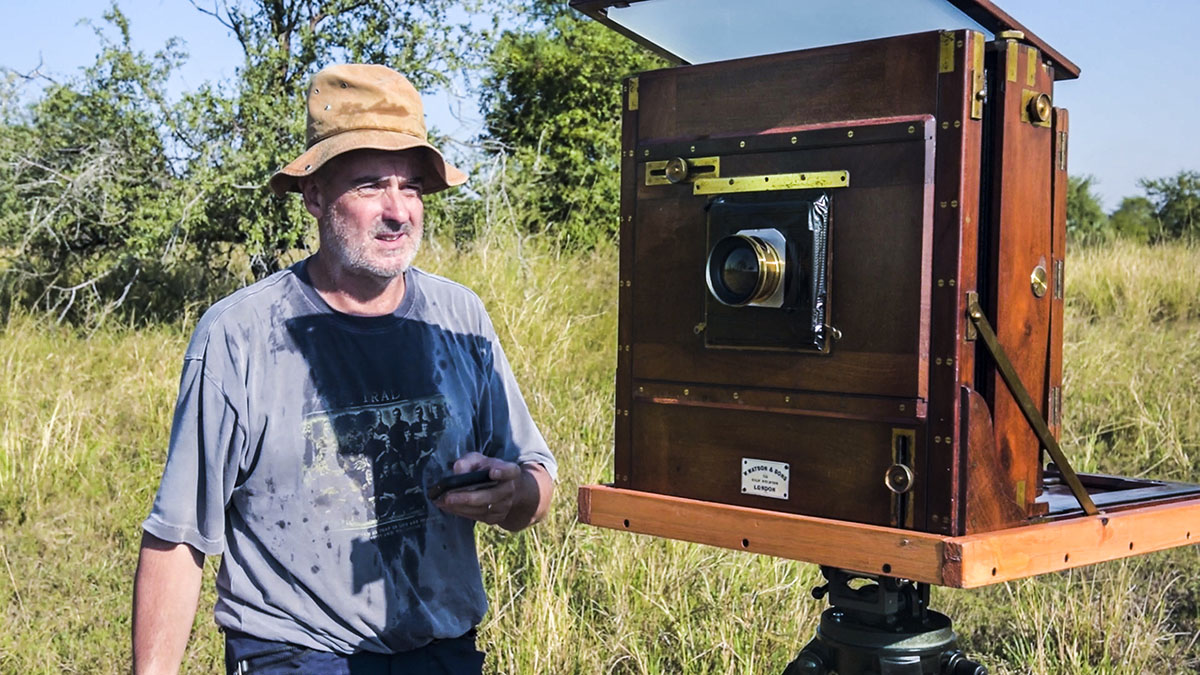 Analog photographer Fionnbharr Ó Súilleabháin is telling to The Calotype Society XXI how he was arrested while calotyping.

“This darkroom story is about what happened when I stopped to photograph Mesquita Halima Bibi, the main mosque at Maxixe in Mozambique. Maxixe is a town on the main EN1 North-South highway that runs the entire 2500km length of Mozambique. I was returning from a 2-week trip to the far north of the country working on a series called “As Mesquitas de Moçambique”.

For this trip I’d specifically built a 10x12” camera with a brightly coloured bellows made from Capulana, the ubiquitous fabric in Mozambique, although the best ones are actually printed in The Netherlands and the lower quality ones in Tanzania. The fabric designs in a given year are, however, decided on by a Mozambican committee.

When photographing the mosques I always searched out the Imam to explain the project and ask permission. In all but two of the 70 mosques I made calotypes of, the Imams were very friendly and happy for me to make the images.

“I set up the camera and prepared to make the image”

When I stopped at Maxixe I was in a hurry as I had a deadline to return to Maputo. As luck would have it I arrived around 11.30am and the guard at the mosque told me the Imam would soon be arriving for noon prayers. Cars and men started arriving and sat about waiting. I was treated to some fairly hostile stares until the Imam arrived and was happy to explain to me the history of the mosque. He explained that it was unique in being named after a woman, the sister of a sheik who was a founder of one of the Islamic associations based in Maputo. I set up the camera on the pavement opposite and prepared to make the image.

“I became aware of the increasing number of policemen…”

What I had only been vaguely aware of was the police station right opposite the mosque. I became more and more aware of the increasing number of plain-clothed policemen who came out to stare at me. One eventually came and asked what I was doing, he was friendly and did not seem that bothered. However, about 3 minutes into the 6-minute exposure the police chief emerged in an army uniform and started shouting at me, screaming and demanding I come inside the station with him. The plain-clothes guy said I’d have to stop, I tried to explain I would but after I had finished the exposure in a couple of minutes. I pointed to the street kids eyeing the rucksack and camera and he shooed them off and when he said the stuff would be ok I believed him as the locals are in general afraid of the police, with good reason.

The boss man was now apoplectic that I had not dropped everything and, there now being a crowd of police, mostly plain-clothes, out watching, I replaced the lens cap and stupidly also re-inserted the darkslide – my thinking being they might come and fiddle when I was out of sight. The photograph showing the camera and mosque was taken about a minute before my arrest.

I insisted on putting the rucksack with lenses etc back in the vehicle and locking it, buying time to phone the security officer at the British High Commission, where my wife happened to be the British Ambassador (High Commissioner). I managed to explain to him I was being arrested and had no idea why and could he escalate it. I had diplomatic status, was clearly driving a diplomatic vehicle, so my arrest was going to cause a shitstorm if they continued.

So it was I ended up in a room with 5 men, and they closed the door and demanded to know what I was doing. I repeatedly said I’d asked permission of the Imam, he was happy so what was the problem? After a bit of to-and-fro like this, I realized that what the police chief really wanted was an apology that I hadn’t first gone to him to ask permission. That I’d had the affrontery to turn up and start making a photograph within sight of his police station without first showing him due deference had been taken as a personal slight. I decided the best thing I could do was give him what he wanted – I could always get a complaint filed to his superiors later. So I apologized profusely, of course there had been a complete failure on my part, how stupid of me not to have asked permission, what had I been thinking etc. Having massaged his ego I was released and the original plain-clothed guy looked quite sympathetic and told me I was free to continue – I could tell that he at least thought the whole thing totally overblown and unnecessary.

“The camera had not moved and the image was just fine”

So I removed the dark slide again, gave it the final 3 minutes and left as fast as I could. I was furious with myself for re-inserting the darkslide as it would probably have moved the lens enough that’s I get a ghosted image. I was angry I’d have to return to re-do the image which would involve meeting that police chief again and having to grovel for permission.

But I should never have doubted the Berlebach tripod and bomb-proof Reis head. The camera had not moved and the image was just fine.

“About six months later I have heard news from Mozambique…”

About six months later I read with delight that the same police chief and one of his staff had been arrested for murdering a local village headman who had affiliation to Renamo, the political opposition. I was not surprised to hear the police were implicated in murder, but I was surprised the guy was arrested for it. He must have upset local Frelimo party members.

It was not the last time I would be arrested in Africa for making a calotype, but that’s another story”.