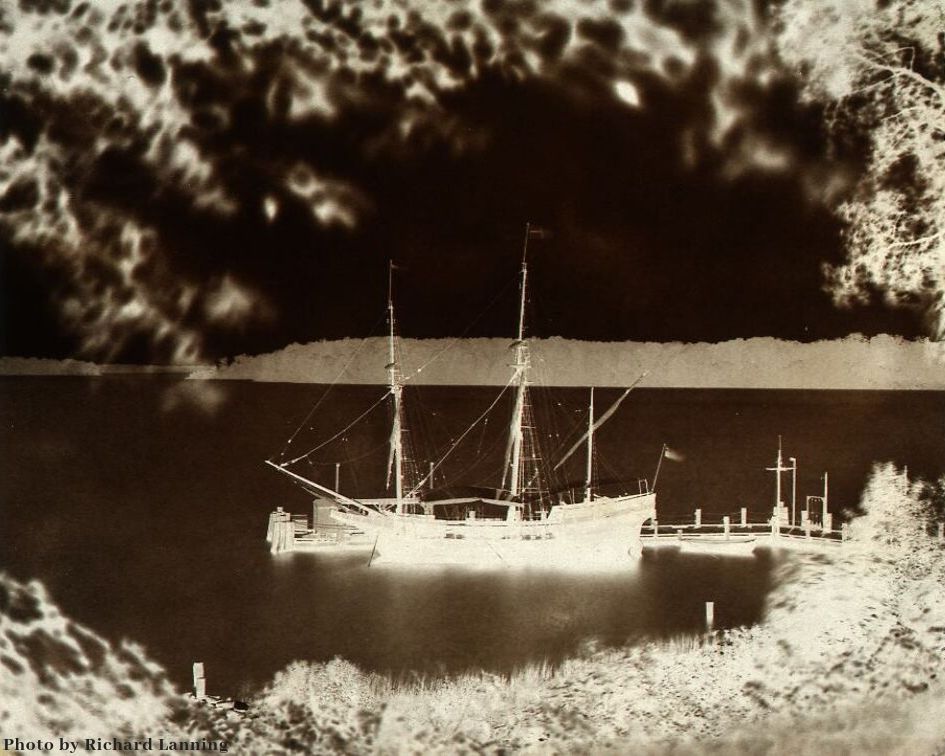 Retired Police officer Richard Lanning became a calotype photographer in 2010 when he found a book about Fox Talbot. Calotypes of Talbot inspired him so much that he decided to start making it too.

About profession before calotypes

The calotypes came into my life some 9 years ago. I’m a retired Police officer. The last 12 years of my service was in the Crime Lab as a Forensic Crime Scene Investigator.

I have a high school diploma with some college but no degree.

I started attempting my first calotype early in 2010. I was on a multi-year journey trying to find something in my photography that just seemed to be missing. I enjoyed frequenting a used book store near my home where I purchased the book “First Photographs: William Henry Fox Talbot and the Birth of Photography”. That is to say I read this book cover to cover and became amazed by the look, feel, and mood of the images on the pages. I had to learn this process. After about 6 months of frustration in the darkroom, I finally got my first image. It was a horrible image of a rolled hose on the back deck of our home, but it was an image nonetheless. It was like winning the Lottery. I was hooked.

About first experience with calotypes

My first experience was failure. In other words, as a matter of fact, so was my second, third, fourth, and so on. After that, I was determined, and after finally getting a little help from the newly reformed Calotype Society, I had success. Experimenting in my bathroom at home, I took an exposure of a rolled hose on our deck through the window of our home. Probably much like Talbot’s first photos of his window. It was an exposure made close to the darkroom so I could quickly develop while the paper was still moist.

About pictorialistic effect of the calotypes

So, the calotype is unlike any other style of photography. After struggling for so many months just to obtain my first image, I quickly developed a love for mood and mechanics of the image. All of it appealed to me, from cutting the papers to size, to developing and printing. To this day, each image that I watch develop before my eyes still gives me the feeling of winning a Lottery. I also like that the images are imperfect, a bit pictorialistic. Even in printing you will never get two images that are alike. Mother Nature will always put her fingers into the end result.

What new and important things did you discover by working with this technique?

It’s not new, but was certainly new to me when I starting using the Pelegry method and learned of its long lasting shelf life. I was finally able to use a form of calotype that I could preserve and travel with. I also discovered that by keeping my sensitized papers in the film holders I could omit the chemical dextrin in the process, making things a bit easier in the darkroom. I furthermore discovered that I could use honey in place of the whey protein during iodizing. I miss making Pelegry cheese to extract the whey protein, but honey is much easier.

About cameras and recipes for the calotypes

So, my first camera was an Eastman View #1, 5×7 glass plate camera. I still use this camera today.  It is my favorite travel camera.  I have also added a Deardorff 8×10 to my collection.  Both cameras are used with glass plate holders. I find the clear glass helps hold the paper flat and in place.

What recipes for making calotype are you using?

Firstly, I started with the Talbot method, but quickly moved to Pelegrys once I realized how long a sensitized sheet of paper could be stored.

I’ve had no formal training. I have only had a passion. It is only through the Calotype Society Flickr page that I think I had any luck at all. Richard Jones, Finn, and Wlodek have all been there with me to help me through the rough areas.

About the biggest influence

I’ve studied many different works from Talbot to Hill and Adamson. However, I think the biggest influence to my work has been the death I saw on a regular basis before retiring. Before retiring I suffered from anxiety and depression. I was diagnosed with cumulative PTSD. Much of the things I was photographing, I could not control. It wasn’t until the calotype that I started seeing my camera, my darkroom, my process, as a way of taking back control of my emotions, and what I was photographing. The calotype has been a healing process for me. I think those dark days are still fairly evident in my work, but it is work that I now control.

About subjects for calotypes

First of all, when I started out, I was as much in love with the process as I was with the product. I enjoyed countless hours of experimenting to achieve my results. Further that experimentation has turned more into control.  Every image I expose is now a success. That love is now transferring to the final print, yet it is still hand in hand with the process.

For example, my first darkroom where I began my experiments was a professional darkroom in the Crime Lab where I worked. That didn’t last long once the digital camera came along. The darkroom became a computer room for the storage of digital crime scene photos. Out of need, my darkroom for many years was our basement bathroom. The 5 foot by 7 foot room was cramped once you started hanging papers to dry, but it was all I needed. Plus it had a toilet. Bonus.

What did you learn about life after making calotype photos?