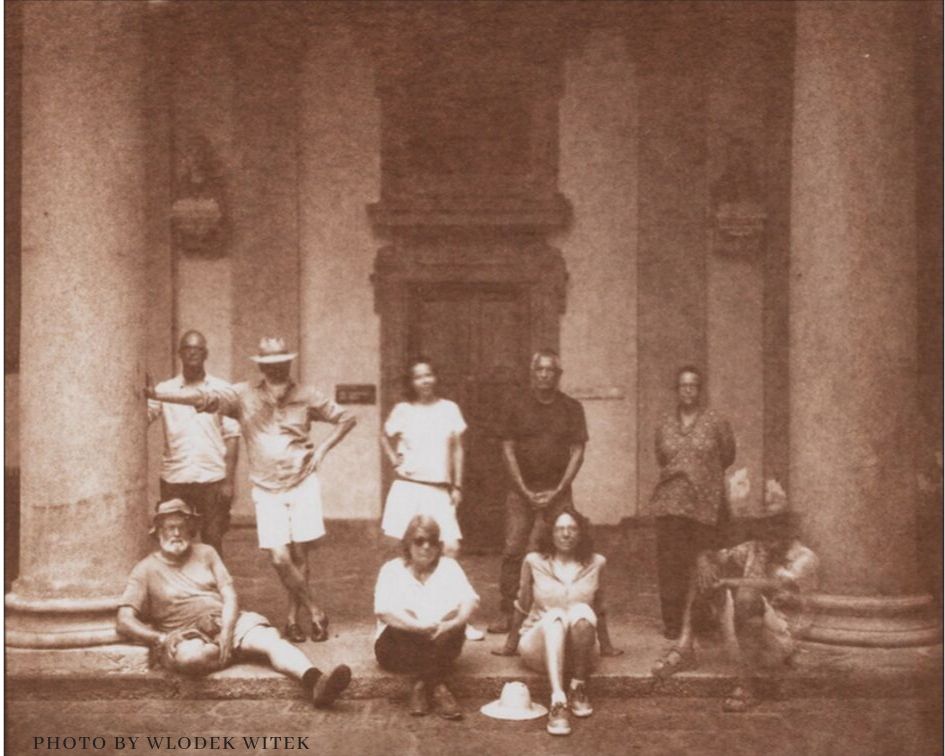 Every two years The Calotype Society meets in a place connected to the history of the calotype. This year, the CALO IV meeting has been held in Milan, Italy, from June 27th to 30th.

Everything was planned as well as possible. But the fact that the meeting happened in the heart of one of Europe’s worst heatwaves could not be predicted!

One important decision was to show not only the prints, but the calotype negatives, too after all, this is the heart of any calotype-related work. The opening on Thursday 27th saw quite a lot of people showing up with a lot of interest, in spite of it being the hottest day in the heatwave! During the month hanging, the exhibition raised a lot of public interest.

On Friday 28th morning some of the calotypists left early to start exploring the city. They were calotyping in the extreme heat (respect!). Later the group met in the Accademia di Belle Arti di Brera, to make the traditional group calotype in a shady corner of the courtyard.

Some calotypists took a few more photographs of the architecture. Then the group moved into the archive of the Academy. It was great possibility to view the 75 salted paper prints by Luigi Sacchi, one of the most significant early calotypists in Milan. The visit at the Academy was rounded up with a visit to the “quadreria”. It is the painting and plaster cast deposit of the academy.

On Saturday 29th morning The Calotype Society met for a guided tour of Milan’s cathedral. It is started from the rooftop, through the cathedral, and into the excavation of the earlier churches underneath the current cathedral.

Exhausted but enriched, the group transferred to the gallery. Because it was time for Wlodek Witek’s presentation of the “chromatype“, a direct positive printing technique described by Robert Hunt in 1843. Together with the students of the restoration school the group first learned some theoretical background on the technique. Then we transferred into the darkroom around the corner to make two chromatypes. It was an homage to both Robert Hunt, and Leonardo da Vinci. Da Vinci’s 500th anniversary of death is being celebrated this year in Milan – where there isn’t just the Last Supper, but also Sala delle Asse. It is a room in the castle entirely decorated by Leonardo.

The last appointment was on Sunday noon, when the group met for a guided tour of the Last Supper. Again, some of the calotypists braved the heat and ventured out into the city early on, to make some more calotypes.

But the CALO IV meeting was not only a sequence of calotype -appointments. The photographic activity was well balanced. We had lovely dinners and chatting with a glass of wine, and the evening breeze to freshen up – or was that a limoncello?

Meeting the new member of The Calotype Society

The Calotype Society was unfortunately not complete – many members could not attend. It was a rather small gathering – but it’s not the number of people, but the quality that counts! There was also a newcomer to the Society, Tony Tidswell. He brought many calotypes and prints to look at, and even more enthusiasm and warm-hearted kindness. In other words, he is a welcome new member to The Calotype Society!

Every attendee contributed in a special way, and as the wise men say – you never come back from a journey the same. And it couldn’t be more true for the Calotype Society meetings. Each time we meet we take home something new, a fresh seed that might take a while to germinate, but will at some point bear fruit.

So The Calotype Society is finding its shape and formula – at the end of the meeting we forged some new plans on how to move ahead. You might hear back for some news in a not too distant future!